A location-aware app revealing the history of the town that hosted The 2019 Open Golf Championship.

Between the 18th and 21st July 2019 hundreds of thousands of people descended on the peninsula town of Portrush, on Northern Ireland’s north coast, to watch golf’s 148th British Open. It was nearly 70 years since the town’s premier golf course ‘Royal Portrush’ staged the first open to be held outside Great Britain.

The iconic sporting event brought a huge boost to tourism and the Portrush Heritage Group commissioned AT Creative to build an interactive iOS and Android app to help tourists learn about the heritage of the whole town during their stay. 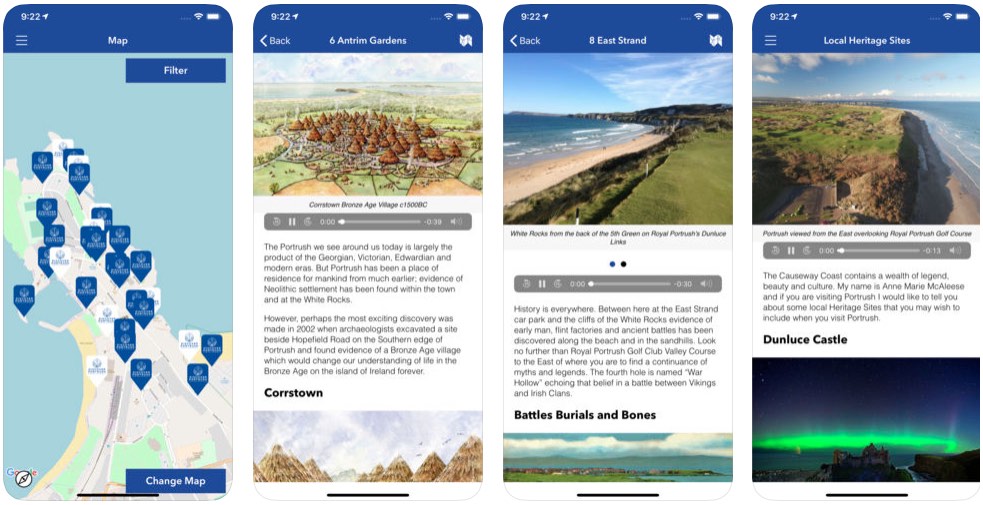 The app is packed full of fascinating facts, with local TV journalist Sarah Travers leading a plethora of voices who narrate the stories spread liberally throughout the Discover Portrush app. Locals too will discover many tales about their town that they didn’t know.

I would like to express our sincere thanks to you and your colleagues at AT Creative for your guidance and support with the development of our Heritage App. We entered this process with no prior experience of app development and despite the distance between our locations your team guided us through the process in stages that made the journey so enjoyable and rewarding.

As you explore the streets using the interactive map look out for the Heritage Trail markers in the pavements, at these locations the app’s multimedia content will automatically trigger and burst into life. Uncover amazing archaeology, see how the town used to look and listen to tales of bravery and sadness revealing Portrush’s past – the sea has played a significant role in shaping the town’s past. All the content on the app works offline once downloaded, even the map, and the iOS version also includes Siri shortcuts that allow you to control some of the features with your voice.

The app lets you set your own pace to discover Portrush. Take your time; walk leisurely or rest upon a seat in one of the eight relaxing areas highlighted on the map and let the heritage of Portrush flow around you and be brought to life. Hear how more than 50 national golf championships, British and Irish, have been decided at Portrush, which sits only a miles west of Northern Ireland’s most visited cultural attraction, the National Trust’s Giant’s Causeway.

The app was part funded by the National Heritage Lottery Fund. Read more about their contribution to the project.

I have just returned from a week spent up in beautiful Portrush and I want to commend you on the excellent and informative Discover Portrush app. We found it very interesting and spent a lovely evening following the trail. We also met another family with children out tracing the trail on their phones. It was wonderful to find an activity that is free and also educational. Well done to everyone involved in this project.

Why not give this app a try? Select one of the options below to open the Apple App Store or the Google Play Store.